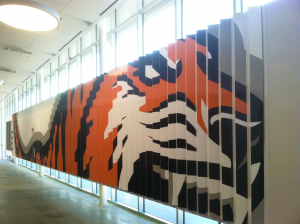 Toronto-based design firm, Entro, lived up to their stellar reputation in envisioning the design for a comprehensive signage program for the Gene Polis­seni Center, the new home of the Rochester Institute of Technology hockey teams. The visually-stunning display, a prominent focal point within the state-of-the-art facility on RIT’s Henrietta campus, incorporates the tiger brand in inventive fashion.

The details of the multi-part display are fascinating to behold. Abstracted and sliced into shift­ing verti­cal strips, the graphic elements of the display’s centerpiece create the illu­sion of move­ment in delight­ful, surpris­ing ways. RIT’s Sports Hall of Fame honors inductees in a contin­u­ous origami-style recognition wall that alter­nates between tiger stripes and the inductee panels. The result is a dynamic faux-lenticular effect that shifts depend­ing on view­ing perspective.

Credited with an Assist: Our Role in the Process

ID Signsystems was excited to play a vital role in bringing this intricate design to life in its permanent home. As the project’s sign and graphic fabricator and installer, we took pride in ensuring the integrity of this dynamic concept. It was an intricate project to construct and install, and the results reflect our attention to detail and high standards. It was a privilege to work on this project and to partner with a leading design group like Entro.