Wayfinding development for large campuses and complexes, whether they are for airports, business parks, colleges or hospitals, require extensive large scale planning that goes beyond the initial design to the development of a management approach that can extend for thirty or more years. Campuses often go through at least one re-branding effort every decade, as well, and yearly expansions that require frequent changes and additions. ID Signsystems (IDS) has developed a campus wayfinding system for these projects, best exemplified in their work for Rochester Regional Health and University of Rochester Medical Center

IDS has developed an innovative design/build process based around the long term needs of large campuses. The process starts with an evidence based analysis of the organization, their brand, and their architectural assets. This is combined with a review of current wayfinding best practices. The result is a master plan that show how identity will be integrated into a variety of internal and external wayfinding signs, and an address and destination hierarchy that will be applied for all subsequent projects. A strong planning process results in a wayfinding system that can survive the many changes and expansions that occur over time. 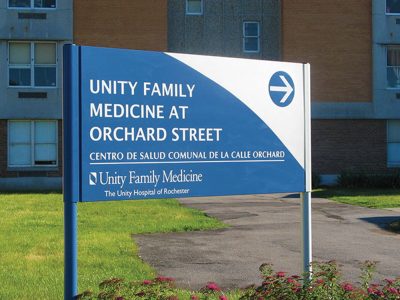 When Unity Hospital became part of the Rochester Regional Health System it resulted in a massive change of brand identity. The original clear guidelines IDS applied for Unity made the transition process much easier.

One major part of the planning and design process that is crucial for ongoing system development is the creation of powerful guidelines. These updatable documents profile every sign type as well as the planning logic, color, material, and modular system palette that grounds each element. Effective guidelines not only enforce consistency, they also make system expansion far easier by ensuring that new additions fit well into the existing vocabulary.

Guidelines need to have a strong vocabulary of different elements as well as a rule book for how they go together under different building scenarios.

There are distinct differences between developing exterior wayfinding standards and interior standards. Exterior signs have extensive coordination with landscape, architecture, and illumination. During the development of exterior signs, it is important to develop scenarios for how each exterior sign can be applied including, building mounted, large monuments, and different landscape conditions. 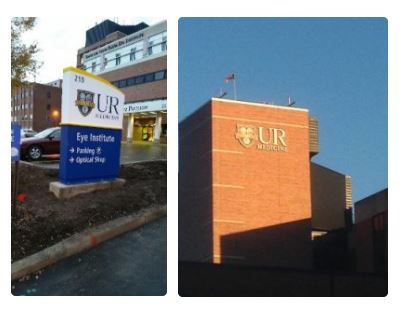 The larger the facility, the tighter the interior wayfinding logic often needs to be. This starts with a highly organized destination hierarchy and address system that can be applied to a wide variety of signs. ADA oriented identification signs in particular need to follow an extremely tight logic governing message and sign placement. Finally the system has to have a powerful modular logic that extends beyond the sign itself to the management of new signs and alteration of existing signs. 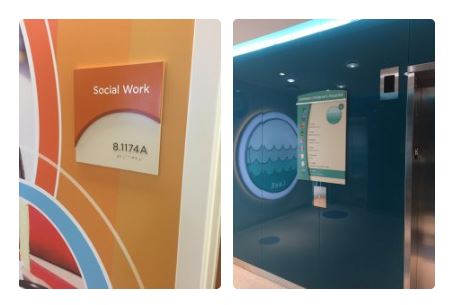 At Rochester Health, the interior system was developed to change frequently over time, which proved to be crucial when the entire system was redeveloped.

In addition to signs donor programs and development of interior environments is crucial to look at the identity of entire spaces. This includes a comprehensive donor plan that parallels the wayfinding system and the development of important interior spaces. 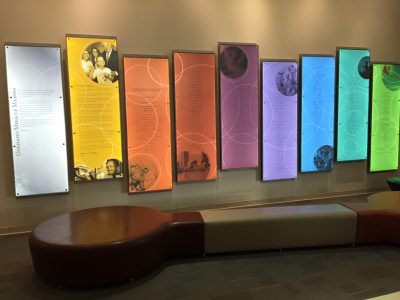 A final aspect of healthcare wayfinding that is undersung but very important is patient/doctor communication technology. These panels provide information that allows patients and their families to know their condition, and can also be used to manage patient care for staff. 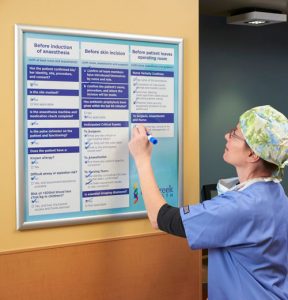 Patient information is a central part of wayfinding projects and should be included in the overall planning process.

When Frederick Law Olmstead developed the plan for Central Park, he said that it would take decades of diligent effort to know if the park was a success. This is the same with large scale healthcare and campus wayfinding systems, but with planning and a diligent documentation process, long term success is a certainty.

Read more about how we approach healthcare wayfinding in the October issue of Signs of the Times Magazine!